Today’s announcement by the Government of British Columbia marks an historic moment in our community, one that honours our elders past and present.

In acknowledging the wrongs of the past, we begin to heal the wounds and open the doors to a future that is inclusive of all.

In seeking redress for its communities, the NAJC acknowledges with respect the on-going struggle of Indigenous Peoples throughout Canada. We stand with the survivors and families of all children who were in residential schools. We need to heed the Calls to Action from the Truth & Reconciliation Commission.

Today, May 21, 2022, we are humbled to share this important announcement with our community.

Acknowledgment of Internment and Japanese Canadian Legacies in BC

Although today, British Columbians are committed to a fair and just society, we recognize that has not always been the case and that as a result, many members of our Province have lived diminished lives.

Before, during and after World War II, the Provincial Government advocated for the removal of nearly 22,000 Japanese Canadians from the West Coast, as well as their internment in the province's Interior years after the War's end; pushed for the confiscation and forced sale of their property; and held weekly auctions of Japanese Canadians' belongings.

After the war ended in 1945, Japanese Canadians were prevented from returning to the Coast and instead were ordered to move east of the Rockies or deported to war-torn Japan. When the community was allowed to return to the coast, in 1949, it had nothing to return to.

Japanese Canadians suffered irreparable social, economic, and psychological harm at the hands of the British Columbia government. The government stripped them of their homes, businesses, farms, boats, pets, friendships, and belongings; entire livelihoods were taken, and entire communities vanished. But more than that, it took away an entire community's freedom, security, basic dignity, and sense of home and identity.

This is not a proud history. And so, today, on behalf of the Government of British Columbia, we acknowledge the past injustices that were committed and recognize with thanks, the contributions that Japanese Canadians have made to the building of this Province. Today, we are further building on that apology by making an historic investment honouring the Japanese Canadian community with lasting recognition of the traumatic internment of Japanese Canadians during the Second World War.

The Government of British Columbia is contributing $100 million in funding to support the legacy initiatives recommended by the National Association of Japanese Canadians, in conjunction with Japanese Canadian communities in B.C. The initiatives are: Monument; Education; Senior Health and Wellness; Community and Culture; Heritage Restoration; and Anti-racism.

The Government of British Columbia acknowledges the hardships and trauma people suffered because of government inaction and action before, during and after the war. We know that healing the wounds of the past is a long process. Across government and together with our partners, we are focused on honouring the diversity and contributions of all communities to the B.C. that we live in today. It is more important than ever that we learn from the mistakes of the past and acknowledge historical injustices. And to not let any power or persuasion deter us for standing up for our fellow citizens and protecting the human rights we hold dear. 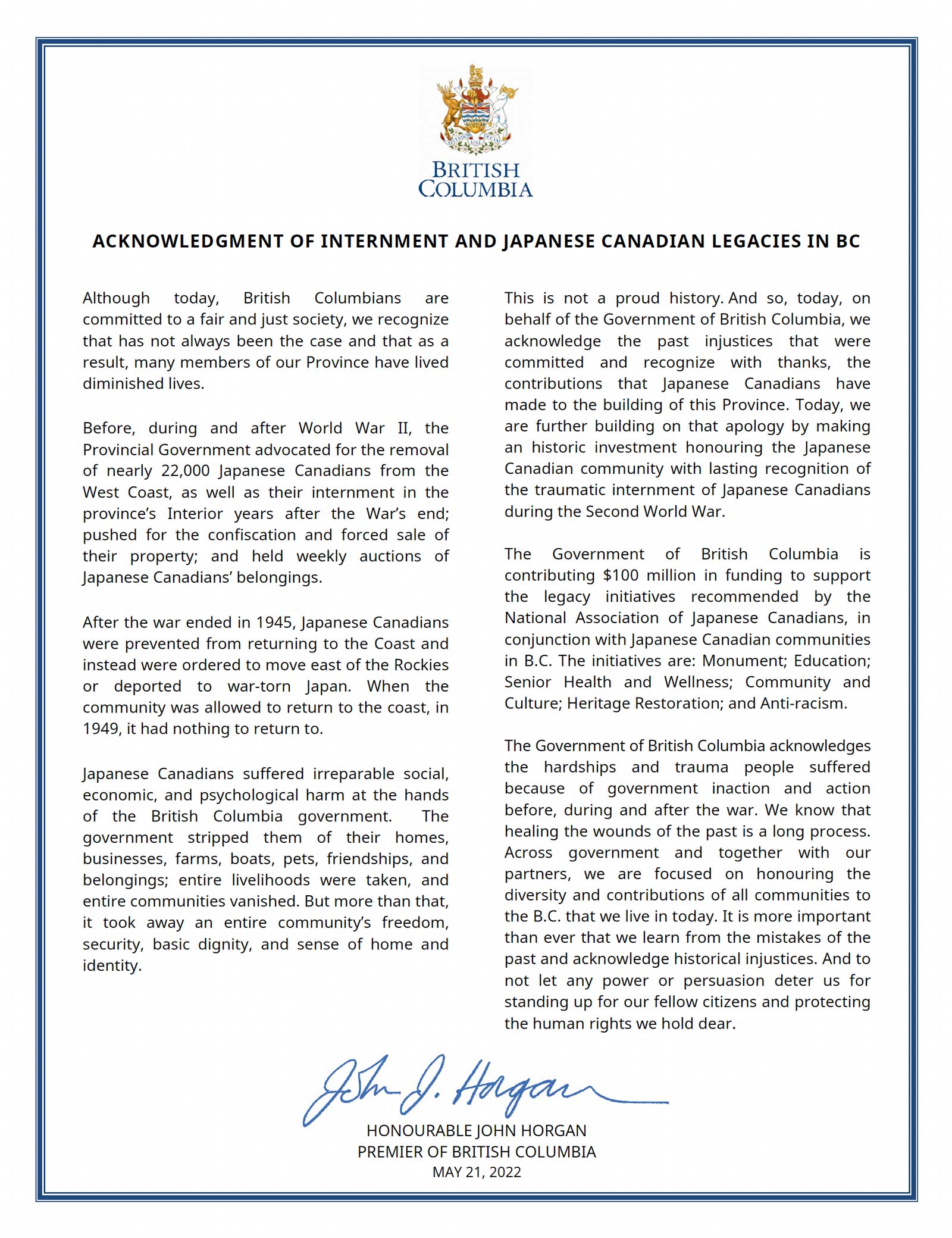 Read the Government of BC press release

Please check back often, we will update this site as the BC Redress process unfolds over the coming months. Ultimately, BC Redress belongs to you, and we are grateful for your input, and for your support. 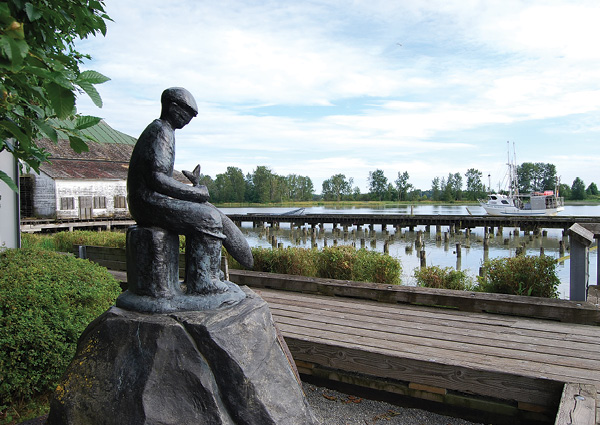 Historic Announcement Scheduled for May 21, 2022

Our community has followed the progress during the pandemic to hear our essential parameters of a set of legacy... 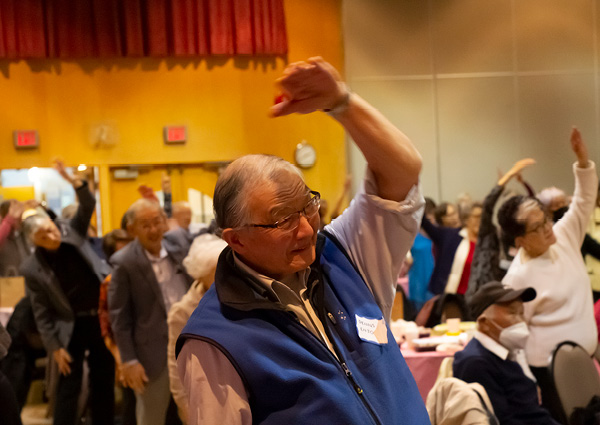 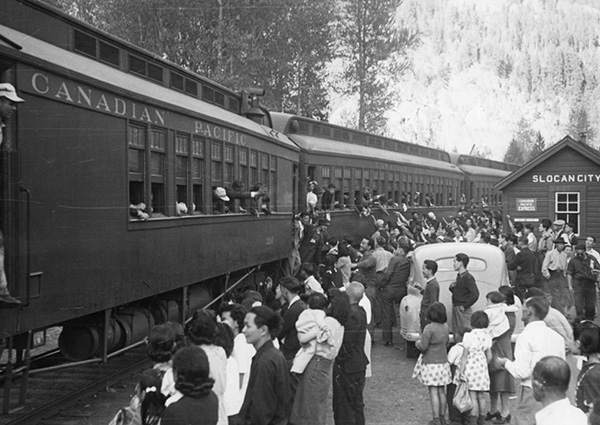 The Japanese Canadian Health and Wellness Fund is winding down its operation of creating, managing, and implementing the initial... 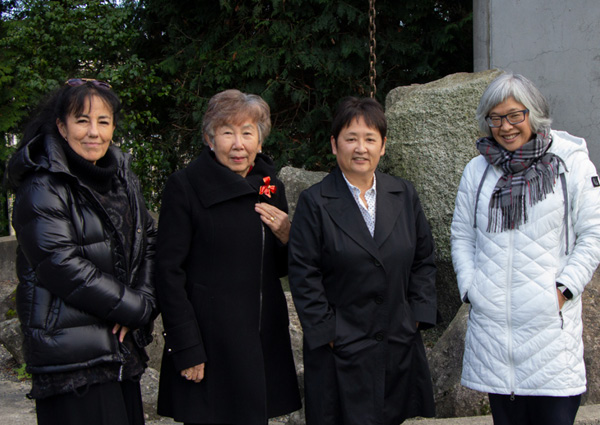 We enter the new year with gratitude to our seniors, their families, and to you who work every day...